Trick or Treat: Too old or never old enough?

As high-schoolers, we have reached that awkward age where we want to go out and receive the candy we have been provided since childhood but are also held back by our impending age and the impression that candy is only given to younger ones. Who’s to say you are too old to adorn the costume of your favorite character? At what age is trick-or-treating no longer socially acceptable? 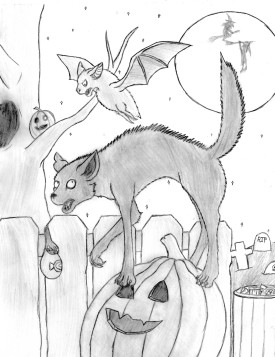 Giving her thoughts on the matter is Ms. Sommer, an English teacher at Kennedy, who said, “The only time I have ever denied kids candy is when they were not dressed in costumes. If they just came to the door with a pillowcase and they didn’t even play along with the trick-or-treat, and they were just like “give me candy,” no… but if they are wearing costumes and they are nice, then I will always give them candy.” Similarly, when asked at what age he would open the door and tell a child they are too old to be given trick-or-treat candy, Mr. Andrews, a history teacher at Kennedy, replied, “I would never say that unless they are not dressed, have crappy attitudes, or are rowdy and stupid. But if you came to my door friendly and dressed up, even as an adult, I would give you candy…” The common opinion here seems to be that adults with children believe that as long as you approach their doorstep with a good costume and a good attitude, you should always get candy, regardless of your age.

To gather further information on when it is no longer “the norm” to put on a costume, a number of students have given their responses regarding at what age they stopped trick-or-treating or if they had planned to receive candy this year. Johnathon Hicke-Fox responded, “I’d say I would stop trick-or-treating at twenty-five…no…thirty.” When asked to further elaborate, he explained, “Well once you hit twenty-five, then you don’t go trick-or-treating, you go to Halloween parties.”

Also commenting on this subject, Brandon Wong voiced, “I’d say the ideal age to not go trick-or-treating is to the point when your whole body is not enough to fit a child’s costume.” From a ladies’ perspective, Aryanna Zavala announced, “I stopped trick-or-treating at twelve, technically when I became a teenager, so twelve or thirteen.”

When questioned what compelled her to stop this yearly occurrence, she replied, “I had a lot of homework and I just didn’t feel like going out…”

All in all, whether or not it is socially acceptable to go trick-or-treating once you have reached (or surpassed) your teenager years, is a matter of personal opinion. So if you plan on trick-or-treating until you are hunched over and balding, or stopping now and finding something else to do, both are perfectly respectable.