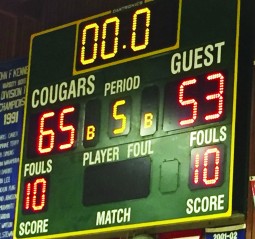 On Friday night, January 22, Kennedy’s varsity squad soared to a crushing overtime victory 65-53 over Burbank on the Cougars home court.    Led by Senior Khari Hutt, the Cougars showed little doubt they would lose the game to Burbank, satisfying the screaming and cheering  supporters in the packed gym.

“I felt good about winning because Burbank forced the overtime but we still managed to push through and get the win, “ stated Jaquari Smith (Junior) a varsity team member.

The Cougars with a record of 11-9 will meet Sac High  on January 26 at home in a contest that will be more challenging.

It was a big night for Kennedy with victories over Burbank by all three teams, Varsity, JV and Freshman.  The JV squad (currently with 17-4 record) beat the Burbank Titans 69-59 in a game where Kennedy’s top scorer was Zavionne Wilson (Sophomore).

“I felt tense while playing but I soon found the rhythm and became comfortable. Thai Saechao (Sophomore)  added, “My favorite moment was when I scored.”

The varsity team huddles and plans during 3rd quarter in Brubank contest. (Photo by Irene Lai)