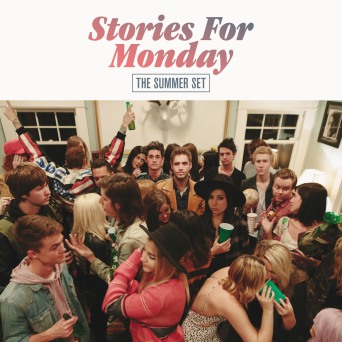 The Summer Set has released their new album, Stories for Monday. For those of you who are not familiar with this band, they are a 5-member group (lead vocalist Brian Dales, guitarists Josh Montgomery and John Gnomez, bass guitarist Stephen Gnomez, and percussionist Jess Bowen.)   The Summer Set formed in 2007 in Scottsdale, Arizona. The group has released three prior albums:  Love Like This, Everything’s Fine, and Legendary.  A few of their most popular songs (my personal favorites) are Boomerang, Lightning in a Bottle, and Figure Me Out.   The Summer Set has toured with more popular bands like All Time Low, Sleeping with Sirens, and We Are the in Crowd.

Their newest release Stories for Monday was given 5 stars on iTunes. I give it the same rating because I enjoyed all of the songs on this album. The Summer Set has a way of turning sad and tragic situations into upbeat songs. When I heard their song Boomerang in a store one day, I looked it up and discovered the band. After that, I couldn’t stop listening to them. Their music is very relatable. They discuss day-to-day conditions that everyone goes through in their lives. For example, when they sing about a bad day, All Downhill from Here is a song that discusses the topic. I personally think this album is one of the best collections by The Summer Set.

The band is currently on tour and was recently in Orangevale on May 6. The next appearance near Sacramento is at the Shoreline Amphitheater in Mountain View concert on August 6. I hope you’ll listen to this album and enjoy their music as much as I do.