See photos taken from the event down below.

Kennedy hosts numerous different sports (baseball, basketball, football, volleyball, etc.), but many share one fundamental action, running. This is the goal of cross country, where teams, consisting of five to seven runners, compete in races through courses. The courses vary from 2.0 to 3.1 miles of different terrains, over hills, and through trails. Runners are scored on how fast their times are. The top five runners on a team will score, while the other 6th and 7th runners can potentially replace other teams scores.

Coach James Bowles, the head coach, along with the assisting coaches, Michael Derrick and Rick Pincombe had a very positive outlook overall of their season, with the team growing and performing exceptionally.

“The kids try hard,” Coach James said in an interview. “I do believe it’s a good program.”

The team has been performing well throughout the whole season, and the top performance definitely continued to show in the Metro Championship meet at Granite Regional Park. Frosh-Soph girls took second with Emma Shoemaker and Crystal Montanez finishing in the top ten runners of their race. Frosh-Soph boys took third; nearly second, but missed only by a margin of two points. Zachary Wong, Mugita Kurosaki, and Harrison Arakawa all had notably strong runs. Varsity girls finished in second, led by Ada Erlewine and Alina Pincombe, whose scores, personal records for the course, aided in the large lead over third place finisher, Valley High School. Varsity Boys, although two of their top runners, Jonathon Joe and Luke Adel, fell ill during the race, Corey Lyons and Billy Hernandez competed well, which helped the Cougars take third in their race altogether. The runners have since gone to Frogtown, for their last competition of the year, with Emma Shoemaker moving onto sectionals, representing Kennedy, to compete against some of the best runners in the San-Joaquin region.

As the team reaches postseason, with cross country finishing their last meet together. Some have concerns with the loss of many seniors. Coach James agrees, “We’re not losing a lot of the seniors on the boys side… Girls is where we hurt a lot, our team of girls is very small. Our Varsity, we’re losing a lot of them… ” But Coach James remains hopeful, however, more runners may give cross country a try. He encourages students to try it out, explaining it as a sport, “…you can do for the rest of your life.” He challenges students who are either thinking about trying it out, or just conditioning for their prospective sport season, to come out. “…We’re more like a family than we are a team… Anybody reading this, if you don’t know what cross country is I challenge you to come find out.”

Michelle Tam (Senior) running in a meet keeping a lead against her fellow competitors. Photo by Alex Ng

Fresh-Soph waits at the starting line to cheer on their team. Photo by Alex Ng. 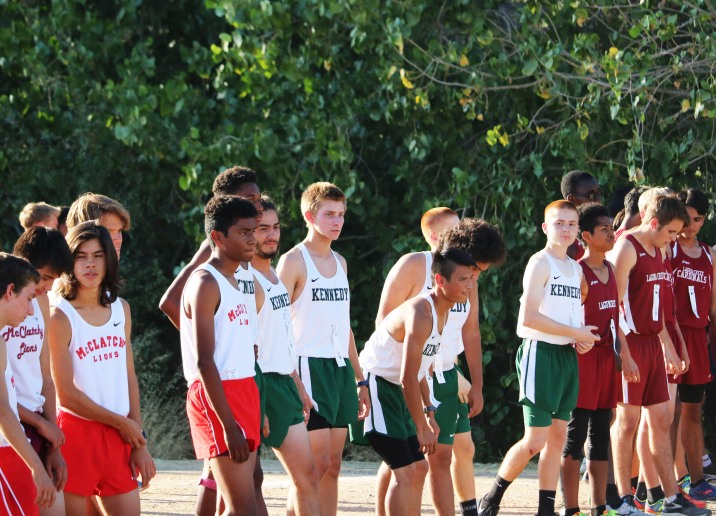 Varsity Boys prime themselves at the starting line. Photo by Alex Ng.