Jeremy Hammond and the JFK music department hosted over 250 guests on Thursday, December 22, 2016. The concert featured the school’s choir, jazz band, orchestra, drumline, and concert band. All exhibited their various talents and skills. This was the second concert of the year.

The choir started the musical extravaganza by singing semi-secular Christmas songs. Jazz band added to the Christmas cheer with tunes like, “Charlie Brown Christmas.” Orchestra’s violin duo put up an outstanding performance. Finally, it was time for concert band to perform. Once the various sections of band took the stage, they entertained the audience with classic Christmas songs like “Jingle Bells” and “Sleigh Ride.” Accompanying our school’s talented musicians, Mr. Van Natten (in the oft-entertaining Kennedy tradition) narrated “Twas the Night Before Christmas” to the crowd’s amusement. Lasting over two hours, the concert showcased our classmates and their talents. It was a “good night” for one and for all. 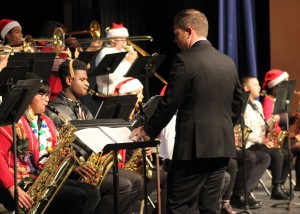