The Clarion Wayback Machine- 45 Years Ago

Published in the Kennedy Clarion, January 14, 1972

Students Will Go To Polls Next Week

“On Tuesday and Wednesday, January 18th and 19th, Kennedy students will be voting for the class and student body officers for spring semesters. The Senior and Junior class this year is headed for a wild election this semester, and the sophomore this year will be the only class that will need to use any judgment in this campaign.”

Sexism in the 70s 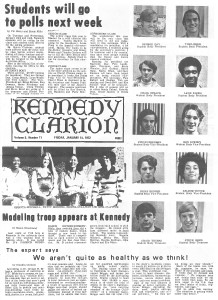 Gymnasts Practice For Season Ahead

“For those of you who enjoy gymnastics, the girls’ gymnastics season will begin on January 22, 1972 at elk grove high school. They have competition throughout Sacramento and also in the Bay Area. Their coach are Mrs. Dorey and Miss Barbara Parcher, she was U.S. national champion in 1970.”

“Early in 1972, the men who plan to declare their candidacy for presidency of the United States will do so. Thus will start the greatest political campaign in the world, and 18-years-old Americans will have a say as to whom the president elect will be.”

“Last night at Kennedy, inside the cafeteria there was a very unusual kind of fashion show, called Mr. B’s Fashion Model Dance Entertainment. Modern dance were added into the modeling, and each model was picked from a different race.”