Garth Jennings has created an amazing animated comedy musical which depicts a koala bear named Buster Moon, who owns a theater that he is struggling to keep open. The film Sing showcases Buster dreaming to make his father proud by staging a hit show in the theater.

Buster tried multiple show ideas but none worked until he has the brilliant idea of having a singing competition for a big prize. His assistant Ms. Crawly’s mistake made the prize more than Buster could handle. Unaware of the mistake, he allows the contest to go on. A large number of people audition for a spot even though there are only a handful of positions. All fight for the prize, but soon discover a more valuable prize: the passion for singing without the influence of money. 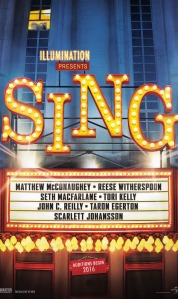 Sing shows how money doesn’t matter, but what really matters is the happiness of doing something you have a general passion for. I really loved this about the movie because it showed that when times are hard, you should never give up, and when things don’t go as planned, your dreams can still come true.

I especially enjoyed the music that was chosen for the movie, as it makes the audience want to get up out their seats and dance along with the characters. It was a family-friendly movie and I would watch it again. Sing is a definite must see.