With the chaotic process of the 2016 presidential race, many Americans are tired of politics and have no idea what the future might hold. From this disaster, two candidates have emerged, ready to lead America into the unknown void of the future. Kennedy teachers, K.C. McCarthy and Aaron Pollock, have thrown their names into the ring for the 2020 presidential race.

Some might consider this announcement to be grossly premature, but both candidates feel it was the best decision. McCarthy stated, “This campaign is all about the people, this is about America.” The candidates want to reach as many Americans as possible and do their best at addressing all the concerns voters have. 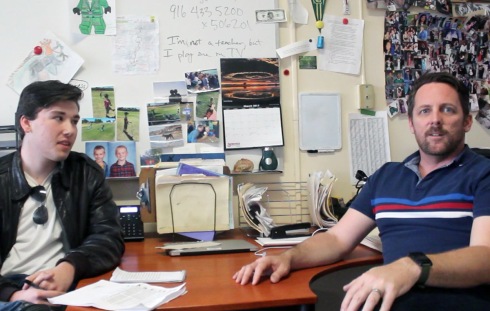 Jebediah Skeets talks with candidate McCarthy at his campaign headquarters in the C Building. Photo by Jazmin Flemmer

The campaign is being spearheaded by rookie campaign manager, Kobi Plisskin-Brewer, a former student of McCarthy. He praised McCarthy’s platform, “He is a strong supporter of undead rights, an area in need of support from the living and holy. After coming out about my vampire state following the blood drive, I’m much more comfortable standing up for my fanged friends.”

McCarthy and Pollock made the decision to run because they were disappointed with Washington. McCarthy stated, “People in Washington are all about self-interest and getting votes.” They later reassured that they would not forget about that aspect of politics, but it would not stop them from accomplishing what they came to capitol to do.

When it comes to accomplishments and goals, the campaign has a number of those. Tang stated the platform would be similar to those of Social Democrats (Sen. Sanders and Rep. Gabbard), with some minor changes. They favor an increase in taxes, and want to expand the areas where taxes are placed. Campaign Economic Advisor Mac MoMoni explained, “We want to increase taxes everywhere. We want to tax people’s breathing, their existence. How might we have clean air without it?”