According to the “Analysis on Internet Memes Using Semiotics”, an analytical research paper on Internet memes conducted from the English Department at Binus University, Abdul Aziz Turhan Kariko observed that memes — cultural ideas or styles spread among people — became a popular, alternative form of communication in early 2012, providing users with a powerful way to freely deliver and share messages on the Internet by combining creativity, art, and humor.

Growing widespread online popularity on Instagram and Twitter in 2014 for his passive-aggressive retort, the tea-sipping Muppet character Kermit the Frog saw a brief resurgence to becoming one of the most favored, relatable Internet meme of 2016 — thanks to the appearance of his cloaked doppelganger’s more sinister side: Evil Kermit.

Created in 1955 by Jim Henson, the green frog’s relentless online success stems from his familiarity as the most memorable Muppet character from the family-oriented television series The Muppet Show and the long-running children’s educational television program Sesame Street.

Don Caldwell, a curator at the internet meme database Know Your Meme, told the BBC, “He is an incredibly recognizable and lovable character, so people feel comfortable using him to signal things about their identity.”

Existing in the form of a still image, the Evil Kermit meme originally developed and went viral on Twitter in 2016, featuring Kermit the Frog meeting his twin nemesis Constantine, dubbed Evil Kermit, who dresses as a Sith Lord from Star Wars and urges Kermit to behave badly.

Users can easily create their own captioned image series with the meme’s generic textual format including the words “me” and “me to me”, followed by commentary connecting to relatable problems or social, cultural, and political messages for viewers to identify with.

Much of the humor of Evil Kermit lies in the captions producing a relatable quip that voices our internal battles and denial. As a result of our poor decisions, we seek comfort in the reflection of negative universal emotions that tempt our darker impulses into indulgence, laziness, selfishness, and unethical acts.

Since his first appearance from Lipton®’s “Be More Tea™” commercial ad in 2014, Kermit the Frog has gained widespread cultural significance on a global scale by becoming one of the greatest frog memes on social media along with Pepe and Dat Boi. He accounts for the cultural dynamics of producing, altering, and sharing digital content on the Internet in the form of memes.

Moreover, as a distinct frog meme, Kermit conceptualizes the complexity of contemporary humor, opening up opportunities for users to continually develop quality content and ultimately contribute to the growth of  t h e  M e m e  A e s t h e t i c. Shakespeare’s plays, known for deepening our understanding of universal truths on the human condition in literature, literally cannot even compare to Kermit in its cultural value. But that’s none of my business. 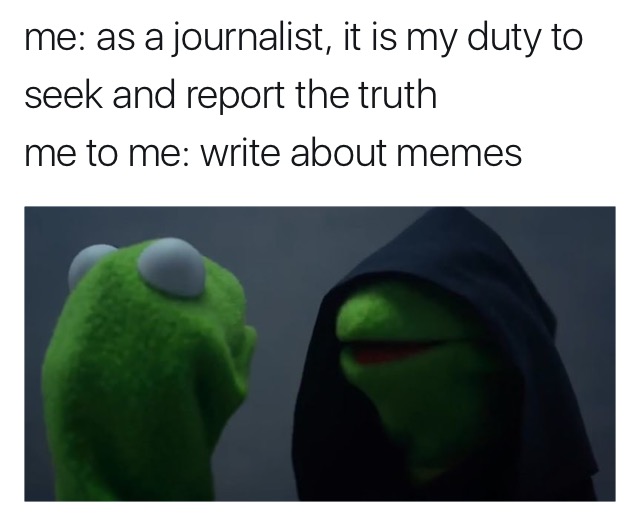 One thought on “An Analysis on Internet Memes: Kermit the Frog”