In the past, students have felt frustrated with this clause of the dress code, arguing that the ban is overreaching and unnecessary. “If I wanna show off my new $80 Victoria’s Secret bra, I really should be allowed to. It’s just me expressing who I am on the inside, and I believe that the Bill of Rights gives me that right,”  Kennedy junior Anne Dergarmint told the Claritin. “I’m pretty sure that’s like the 37th Amendment, or something.” 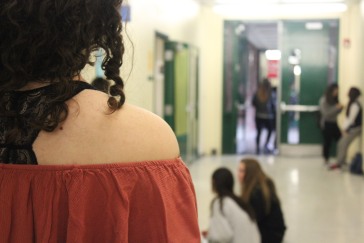 Dergarmint leads the All Shoulders Matter movement against dress code restrictions. She threatens to stage a ditch day tomorrow, April 1st, if administration does not change the open-shoulder policy. Dergarmint stated that she apparently coordinated her ditch with over half the school. “This just shows how many people agree that we need less restrictive dress code policies,” she explained.

The movement led to the rise of a new club on campus, the EXtremely Proud Of Shoulders Enforcers (EXPOSE). The club’s mission clearly states that the club is not just for students who are proud of their shoulders, but also for the open-toed shoe wearers, hair models, and elbow aficionados on campus. The club will meet on Fridays before school in the C-building elevator room.

However, counter-protestors met EXPOSE with resistance. Pat Asherdon, a Kennedy senior, argued, “Seriously, you can’t just come to school dressed like a prostitute. That’s not what school is about.” Like Dergarmint, she claims to have coordinated a school-wide movement in counter-protest. According to Asherdon, for the rest of the year, concerned students will come to school fully clothed to show their distaste in easing the dress code.

“Honestly, my favorite part of a woman is the shoulder,” Clive Ickle, a sophomore admitted. “If I see a bunch of shoulders everywhere, I get excited, which can end up kinda embarassing for me. Spaghetti straps are really unfair to students with shoulder fetishes, so the rule should stay in place.”

Some students even support wider restrictions. Noah Omo proudly asserted, “Some of the guys here are too good-looking! I mean, I’m not gay, but we really need those hot, toned shoulders out of sight. Tank tops shouldn’t even be allowed in my opinion.”

Prospective political analysts at Kennedy are shocked by the movement. “Kennedy is a highly liberal campus, but the spaghetti strap movement could mean a drastic shift in support, so Democratic representatives should watch this issue closely if they want to keep their seats,” Polly Graham, a freshman, theorized. According to a recent Claritin survey, 47% of students strongly support strict enforcement of “the right to bear arms.” Also shown in the survey, 72% of students could not identify the grammatical difference of “their,” “there,” and “they’re.”

“It will be interesting to see how the courts will interpret this case; I suppose it’s possible that someone made a typo on the Bill of Rights,” Graham added.