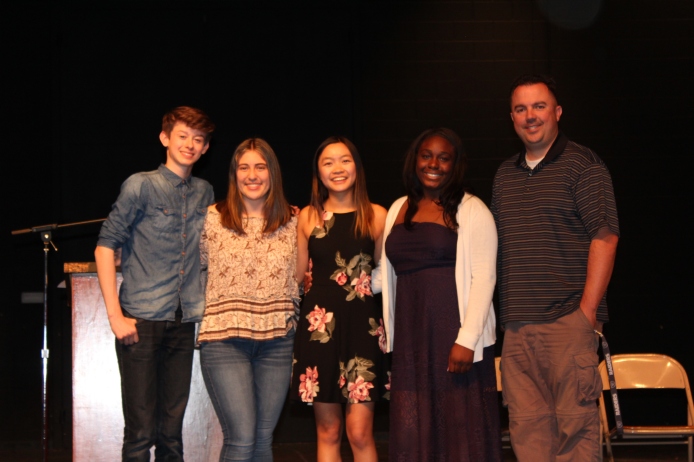 Holding arms tightly like a family, which they have become, ASB cabinet candidates (from left to right) Jake Estigoy (10), Lauryl Gonzalez (10), Julia Cheng (11), and Makenzie Cross (11) breathe their sighs of relief after their last speeches of the day with Student Activities Director Kenneth O’Flaherty. After a brief piano playing session, the four candidates participated in a group interview backstage to elaborate on their hopes for the coming year. (Photo by Saeri Plagmann)

Tuesday, May 16th, Kennedy’s candidates for student government positions spoke to persuade the student body to vote for them in the upcoming election, which will take place Wednesday, May 17th. However, getting the votes will likely not be difficult as most candidates are running unopposed.

The four aspiring ASB cabinet members detailed some of their goals if they are elected. During an interview with the perspective cabinet, Cross urged, “Mainly, I wanna see a spirit change. If that’s not possible, which it’s gonna be, we’re finsta work on that … It’s finsta gonna bouta be a thing.”

Cross hopes to bolster school spirit by planning events such as dodgeball tournaments, and is also listening for students’ ideas for exciting campus events. Despite her own preference for dodgeball, she was aware that most students prefer basketball. She pledged to listen to student voice, “The population that is gonna have the final say in that, so I’m gonna put it out to them, and I’m gonna see what they like, and then we’ll decide.”

All of the ASB cabinet candidates place a high priority on hearing student opinions. Cheng reminded, “We have surveys when it comes to rally themes or spirit days … but I know a lot of people don’t know about them.” To help spread word of the surveys, Cheng and Cross expressed need for a more active social media presence from student government. The two also recommended using social media accounts such as Twitter and Instagram to reach student government.

Estigoy and Gonzalez also added that students can approach any student government member on the stage or during zero period to make suggestions or ask questions.

Student government positions present no easy task. Cross and Estigoy admitted working with administration can sometimes be difficult.  However, they understand the need for a cautious approach. “[Administration] can be difficult, but I understand it because our school does have a budget,” Cross explained.

Cross agrees that rational thought must be used in the decision-making process, “Things have to be justified when we are trying to figure out things. We can’t just go rent a truck and drive across the country with a whole bunch of kids because I don’t know, they won a literacy contest. But that would be fun!”

“There’s a lot of emotion that comes with student activities. Some people feel certain ways and want certain things to go a certain way, and the thing is with ASB, we kind of have to take that emotion and kind of make it more pragmatic and realistic, and so that’s kind of what our duties are here,” Estigoy elaborated on the roles of ASB cabinet. The process involves condensing the student body’s ideas and presenting them to administrators, who approve or disapprove student activities.

“Ultimately, we have the student body, we have ASB, but it’s ultimately admin who kinda decides what goes on around the school.”

Though the job can be difficult, the ASB candidate quartet is unsurprisingly grateful for the chance to run and improve students’ high school experiences.

“I think that being a part of something like this is really important to the school, and I know that with my leadership skills, I can make it greater. I have also met some really cool people, and these people are my friends now,” Gonzalez expressed.

“[Student government’s] been one of the greatest experiences; I’m so glad I joined in high school,” Estigoy beamed, adding that his leadership skills improved and he made many friends. “I feel a lot more welcome than I think I would’ve if I wasn’t, and in the ASB cabinet, I think I’ll be able to do a lot more than I used to.”

“We’re kind of like a family, so it’s really nice to get to know them a lot better than you would outside of class,” Cheng shared. “Also, I’m more into the planning aspect of things, so I really enjoy being behind the scenes, seeing how things are organized, and what work is put into it.”

“I like being able to help others, and when I need help, they are able to return the favor, because we are like a family. Staying involved with what our school does is pretty fun,” Cross smiled.

“All I ask is that you vote for change, vote for that connection, not because I’m telling you, but because you want to,” Cross concluded her speech.

“I want to!” followed an enthusiastic male audience member. 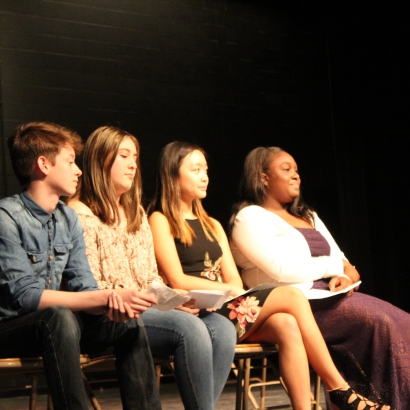 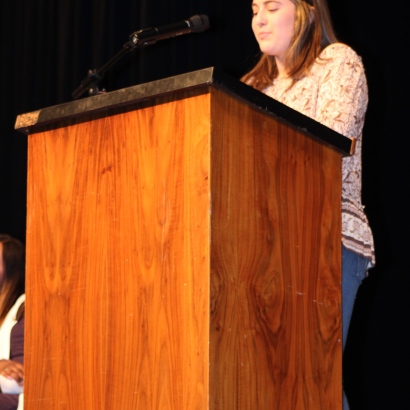 Running for ASB Treasurer, Lauryl Gonzalez (10) addresses the crowd comfortably in her third recitation of her speech for the day. Her second year of experience in student government prepared her to run for a higher position during her junior year. (Photo by Saeri Plagmann)

Addressing her fellow juniors, Julia Cheng (11), candidate for ASB vice president, reads her speech to the crowd. Like all responsible and dutiful representatives, she pledged to listen to her constituents. (Photo by Saeri Plagmann)

Shooting a smile to one of her best friends, Allison Tanaka (11, far left) gives a look of assurance after Julia Cheng (11) finishes her speech. Tanaka and her fellow class of 2018 candidates, from left to right, Vice Presidential Candidate Hannah Dieckmann (11), secretary candidate Priscilla Lao (11), and competing secretary candidate Gabriella Herrera-Griffe (11) applauded for Cheng’s speech, along with the attending audience. (Photo by Saeri Plagmann) 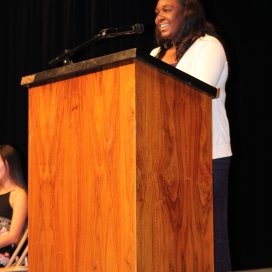 Beaming to the crowd, ASB President Candidate Makenzie Cross (11) seeks change at school and calls on students to voice what change they seek. “All I ask is that you vote, vote for change, vote for that connection, not because I’m telling you to, but because you want to,” she concluded.