Marvel’s Guardians of the Galaxy took the world by storm. Soon people in every corner of the world were having conversations about a talking tree and gun-toting raccoon. . A group of misfit characters, which stayed relatively unknown for 45 years, reached international fame due to the hard work of talented actors, writers, animators, and everyone else involved in the movie process.

Fans were overwhelmed when Marvel announced James Gunn would return to direct a sequel to his smash-hit Guardians of the Galaxy. Gunn used the second movie to explore the dysfunctional family dynamic of the intergala 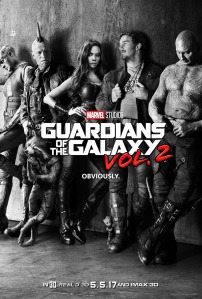 ctic team, showcasing his ability to further develop the characters.

Though the sequel was released three years later, in the film the story has only advanced six months. The audience meets up with the Guardians, and they have been hired by the Sovereign, a genetic engineered race of aliens, to protect them from an interdimensional being. After defeating the monster, the team quickly departs unbeknownst to the Sovereign in pursuit of them. Rocket (Bradley Cooper) happens to anger the alien race, sparking an interstellar crusade lead by Ayesha (Elizabeth Debicki). Shortly thereafter, Ego (Kurt Russell) reveals himself to the superheroes, claiming to be the father of Peter Quill (Chris Pratt).  The team travels the galaxy trying to uncover Star Lord’s parentage and survive deadly encounters, ultimately doing both, and as the trash panda puts it “save the Galaxy twice.”

No Marvel movie would be complete without having a much anticipated end credit scene. Crowds stayed through the credits, and were treated with not just one, but five end credits. These end credits, just like the film, were littered with Easter eggs, nods, and references to other characters, movies, and franchises.  Mementos to the 80’s were numerous and included David Hasselhoff, Kitt, Nintendo, PacMan, and Skeletor.

Whether you are a hardcore fan or a causal moviegoer, Guardians of the Galaxy is the film to go and see. The movie hosts a throwback soundtrack, excellent character development (which most superhero movies do not include), knee slapping humor, and stunning visuals. It has something for everyone, whether you want to cry, laugh, a or just watch things explode.