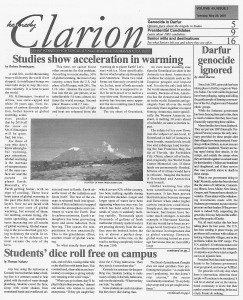 “Ever since the first United States presidential election in 1789, there has been a distinct pattern in those who assume the role as president; they have all been middle-aged, white males. There has never been a legitimate nominee who did not fit the aforementioned criteria. Never before has a minority or a woman been a valid contender in the race.”

“Mr. Cedros wants all students and staff to know, ‘My door is always open. I hope students feel that if they have any issues, they can come by and talk to me. Just know that I will never close the door.’ This will be an interesting new era here at JFK.”

(Editor’s note: Felisberto Cedros was later fired from Hiram Johnson in 2017 after charges of sexual and racial harassment.)

Genocide: A horrible injustice in Darfur

“This is a risk faced in Darfur in the occurrence of American military intervention. If soldiers without the ability to distinguish between the ethnic groups were sent to keep peace, they may not be able to recognize the enemy, should the enemy not be armed with guns and Arab garb to make an obvious distinction.”

“Although the internet provides ways of updating someone with things daily, and keeping in touch with friends, addicts spend most of their time relying mainly on virtual resources and connections and isolating themselves from family and friends, which can lead to complication s with real-life relationships.”