The Kennedy Golf Season had the usual ups and downs (just like the approaches to some of the holes on the courses where they compete) but the results were great despite the challenges faced. Through hard work and dedication, Kennedy’s Golf team had a remarkable season.

“When we won our first tournament against 20 competing schools,” coach Finegan continued, “I knew we had a good team.” 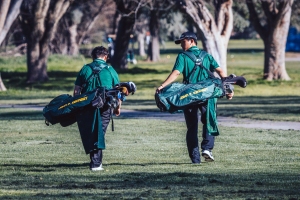 Kendal Bartlett (10) and Jovian Lin (12) walk the second hole in a match against Christian Brothers. Photo by Keegan Morris.

This team went undefeated in the Metro League, putting Kennedy at great odds to advance into the Masters as a team. Unfortunately, the team faced challenges in the form of multiple injuries just before the Divisional Tournament.  Coach Fitzgerald indicated the team handled these setbacks well and gave the tournaments their best shot. Johnathan Tanihana (‘17), who had been the team leader all season, advanced to the masters on an individual basis. He was so impressive that he almost placed for the Nor Cal Tournament, but missed the qualifications by just a small number of strokes.

Finegan’s main goals of the team are, “to get players to commit to the team, communicate, and to work hard.” The team reached new heights under Finegan’s leadership using his three goals. “I chose to coach golf because I love the game and I love being around the game,” finally stated Coach Finegan.