The Effects of Social Media and the Internet

This generation has been dubbed as the “millennials” because it is mostly full of tech-savvy individuals. Campus Technology, a higher education technology magazine, said that if a teen has access to Wi-fi and a cellphone, they would spend up to three to four hours online daily. However, spending all of our time with our noses to a screen cannot always have a positive effect. What we post does not always have a positive impact.

Lately, there has been an abundance of insensitive posts about fairly serious subjects – some of which have originated here at Kennedy. Kennedy has experienced many issues that originated mostly online. 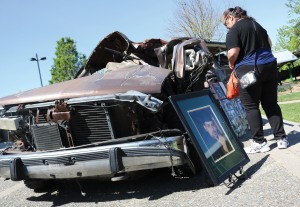 During the Every 15 Minutes Week, a Kennedy sophomore meant to post a funny tweet about a totaled car on the quad. Out of disbelief, Kennedy junior Danke Stroup retweeted that tweet after hiding the sophomore’s name. The sophomore then received much backlash after taking ownership of the tweet.

The totaled car belonged to Michael Jesus Alvarado, who was killed in a drunk driving accident 13 years ago. The parents of the deceased Kennedy alumni brought the car back on campus to teach students the negative impacts that can come with driving under the influence. They do this every year, despite the grief they feel from losing their son.

We have to keep in mind that people can be affected when we make our opinions public. Whether we intend to or not, some people can be seriously offended and hurt. We do not have to change our opinions based on the misfortune of others, but we should be more sensitive online.

Along with sensitivity, we should also be more aware in how our posts can now affect our futures. On April 3, 2017, Donald Trump signed a repeal on the privacy laws made by the Federal Communications Commissions (FCC), which provided us more protections for our personal data.

The Hill, an American political journalism newspaper and website, reported that the repeal had no public support. People believed that there are more important things in the country to worry about besides online privacy. While this could mean bad news for adults, it could be even worse for the youth that partake in social media.

We have to be more protective of our personal information because we never know who could gain access of it. We have to be careful with what we post. Anyone can become a victim to the effects of social media and the internet.