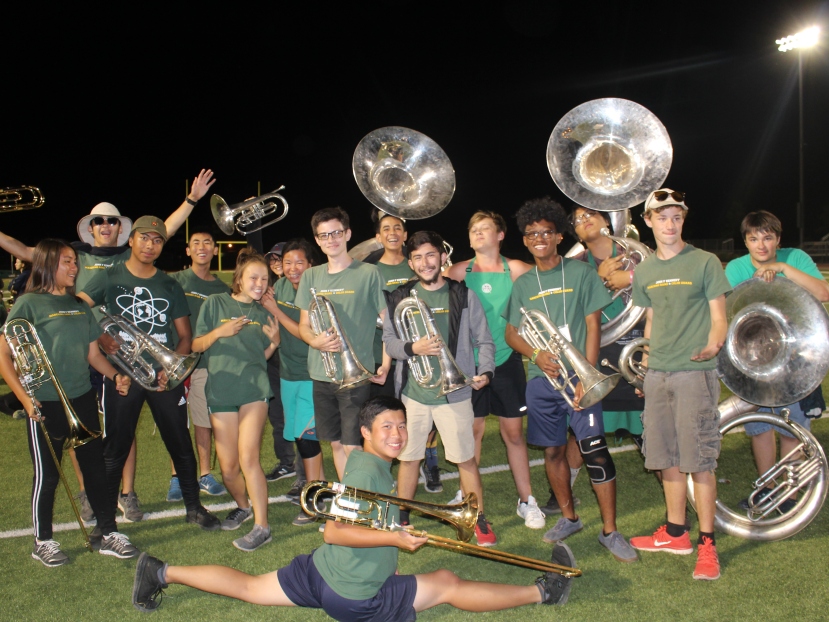 Still smiling after a long day of rehearsal, brass players pose for a photo as rehearsal draws to a close. (Photo by Natalia Hueramo)

While the performance was slated for 8 p.m., band members and instructors had been on campus fine-tuning their show since 9 a.m. Upon arrival, wind players and battery members (drummers) stretched, then proceeded to do marching basics. Meanwhile, front ensemble members (keyboards and other percussion) warmed up and finished learning their show music. Band parents prepared both lunch and dinner, which consisted of hot dogs and fried rice respectively. To finish the twelve hour practice session, the band treated guests with a run through of their performance of Phantom of the Opera.

Once the clock struck 8pm, supportive family members and invited guests flooded the stadium, eager to witness the beginning stages of this year’s fall show. The entirety of the marching band and color guard entertained the audience with a culmination of all their hard day’s work, only to receive a standing ovation.

The night’s event was accompanied with an ice cream fundraiser. For every purchase made, one-fifth of the money went to the band’s Washington D.C. trip as well as three-fifths of the money going to schools devastated by the torrent hurricanes that recently destroyed large areas of the American South. In addition to the ice cream social, Councilman Jennings and Darrell Wu, member of the school-board and JFK alumni, each donated $1000 of their own money to band’s trip fund.