The Kennedy Girls Tennis Team celebrated their last home game with seniors on October 12th with a victory over their opponent, Laguna Creek. As a commemoration, the underclassmen on the team made decorative posters to celebrate and support the senior in their matches.

Jessie Guan (12) concentrates as she studies her opponent during her solo match. In the end she stood victorious. (Photo by Bruce Tran)

“I felt sad because it was the last home game of my high school career. I possibly might not play in college,” said Jessie Guan describing her tennis senior night experience. “[I’m] also happy because I got to see JV (Junior Varsity) set up this whole event for us and make us feel special.”

The celebration took place at around 6:00 PM after the last match was played. Before play began, the two teams met each other at roll call. As all the players met their opponents, they shook hands as a sign of good sportsmanship.

Sarah Wong  (12) practices her serves before her match. The serve is one of the most important moments in a tennis game. (Photo by Bruce Tran)

“There’s a lot going on in my mind, especially because I don’t want to let down my team, so I’m constantly thinking of winning” shared Sarah Wong about her experience during a match. “I have to strategize. I have to think of whether to hit harder or softer in certain games, but I also can’t get too much in my head because if I ever get discouraged, I find that I will perform worse. Since this is my last year I’ve been trying to have more fun and just play more freely.”

At the end of the day, the team took home the win over Laguna Creek High School. The many hours of practice paid off in the end for Kennedy in securing a well deserved victory before a time of celebration for the team’s seniors.

(From L to R) Payia Moua (12) and Angela Hu (12) rehydrate themselves before the game begins again. (Photo by Bruce Tran)

Sarah Wong  (12) practices her serves before her match. The serve is one of the most important moments in a tennis game. (Photo by Bruce Tran) 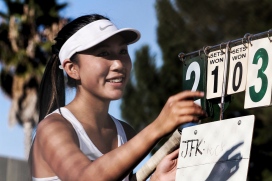 Kayla Fong (12) updates the score with a point for Kennedy in between games. (Photo by Bruce Tran)

Sarina Lin (11) swings, about to strike the incoming ball. She played with great intensity and focus. (Photo by Bruce Tran)

Jessie Guan (12) concentrating as she study her opponent during the solo match. In the end she stand victorious.