Of all sports on campus, some receive more attention than others. The Kennedy girl’s tennis team has demonstrated determination and established their standing in the Metro League with their team as a main support system.

The season got off to a shaky start in August with losses to Christian Brothers and River City, but these defeats did not discourage the girls as they came back with a steady mid-season, with wins against Laguna Creek and Valley High. Eventually, ending strong in October with consecutive wins against Laguna Creek and Burbank, they landed in third place in the Metro League with final metro record being 7-4. 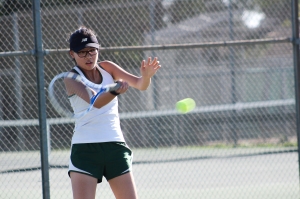 Sarina Lin (11) swings, about to strike the incoming ball. She played with great intensity and focus. (Photo by Bruce Tran, Clarion Staff)

Their final metro standing left them with an open road to playoffs which according to Varsity Captain, Sabrina Leung, was the team’s goal this season. Despite this accomplishment, there were several obstacles to getting them to where they are today from establishing a good team dynamic to pre established opinions about the team among the student body. Tennis, not being a heavily emphasized sport on campus made the team dynamic extremely important.

Even outside of the girl’s tennis team, many members of the boy’s tennis team actively go to watch the team and the girl’s team manager happens to be a boy’s team member, Alex Chan. The students involved in tennis on our campus demonstrate extreme dedication to the sport, encouraging each other to reach their potential.

According to Varsity Captain, Sabrina Leung, “Tennis isn’t a super difficult sport, it isn’t something that requires extremely advanced athletic skills, you just need to have the dedication. Although we aren’t a super recognized team, that only makes us more motivated in the long run.” Leaving seniors encourage students to support the tennis team in the future.