Teachers Set for Strike Wednesday If No Agreement 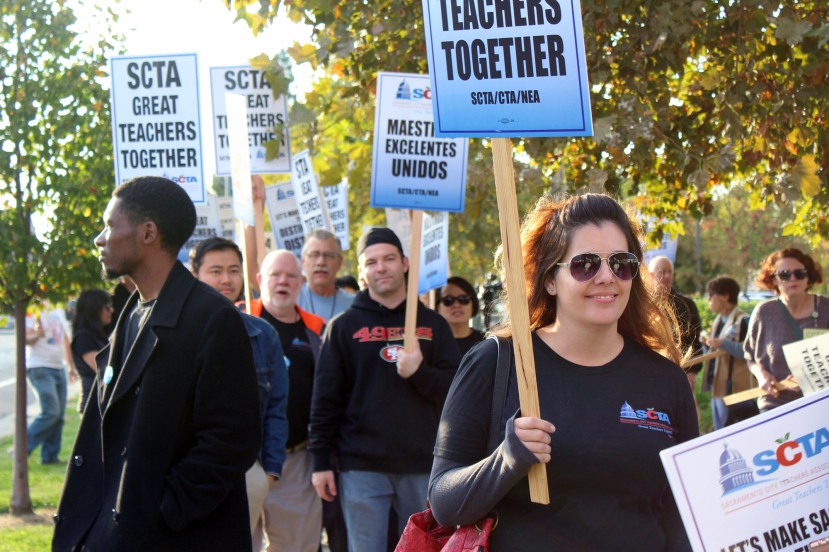 Marching forth with a sign in her hand, Kennedy art teacher Kelly Graves (front right) shows her support for the teachers during a rally before the school board meeting Thursday, November 2. Several Kennedy teachers followed behind her. (Photo by Chris Wong)

The Sacramento City Teachers Association (SCTA) announced that they will plan to strike before the 6 pm board meeting on Thursday, November 2, during a rally outside the Serna Center. The union plans to strike Wednesday, November 8, if the two parties fail to come to an agreement.

This would be the first strike in the district since 1989. Murmurings on campus of a strike began as early as November of 1986.

Walking through the hallways of the Serna Center towards the room where board meetings are held, to the right, abstract sculptures from Graves’ beginning 3-D art class color the walls. Sculpture by Xoua Thao (11). (Photo by Chris Wong)

“We’d also like to make decisions with curriculum, especially social-emotional curriculum so we can tune it to our students needs,” shared Kennedy freshman English teacher Mary-Jo Baniecki.

Though the SCTA has announced the strike for Wednesday, the district still has time to negotiate with the union for a new contract.

“If the district gives us what we need, then there would be no strike, so students could expect business as usual,” explained Kennedy math teacher Vicki Feliz-Smith.

Those opposing the union’s requests point to the district’s budget. “When it comes to implementing those talking points, it costs money, money the district doesn’t have,” asserted former SCUSD board member Diana Rodriguez. She did not mention any specifics regarding the budget.

SCUSD already outranks neighboring district Elk Grove Unified School District (EGUSD) in total compensation, albeit by a slim margin of $986, according to an infographic published by SCUSD. The SCUSD’s current offer would increase the margin to $7,264, the infographic states.

“SCTA, what does class size mean to you? What is it worth?” Rodriguez stated. Rodriguez formerly represented Trustee Area 5 on the SCUSD Board of Education. (Photo by Chris Wong)

“SCTA, what does class size mean to you? What is it worth?” Rodriguez addressed in public comment at the board meeting last Thursday, November 2.

In a flyer released by the SCTA last week, lower class sizes could mean making SCUSD more appealing to new teachers, increasing the number of qualified teachers the district hires.

Should no agreements be made by Wednesday, the district may take several actions that affect whether students must attend school.

One option is to keep schools open while hiring substitute teachers to fill in teacher positions. The district is attracting these emergency teachers with an advertised pay rate of $500 per day. Emergency teachers would be tasked with acting just as regular teachers, with the responsibilities of assigning class work, homework, and grades falling to them, according to a job description on the SCUSD’s website.

“We will have qualified teachers in our classrooms, and the district is providing lesson plans and core subject curriculum will be taught each day,” according to an SCUSD FAQ page.

Students who do not attend school during the strike will have an unexcused absence on their attendance record.

“I can tell there’s a lot of tension among the students. If there is one, we just pick up where we left off,” Feliz-Smith told the Clarion.

Rodriguez was the first to speak on the strike in public comment during the board meeting.

“Now, the SCTA talks about a strike. A strike hurts our intelligent students. A strike can cause a loss of momentum in learning for our children. The loss of learning opportunities exasperates the issue of dropouts.”

A December 1992 Edweek article by Perry A. Zirkel states otherwise.

“…not only are you being unproductive, but counterproductive as well,” Hernandez reads from his speech at the podium facing the Board of Education, with a 2 minute timer staring him down. (Photo by Chris Wong)

During the Board of Education meeting last Thursday, Kennedy senior Billy Hernandez urged the school board to make a decision now in order to preserve students’ learning time, which would be disrupted by a strike.

“…not only are you being unproductive, but counterproductive as well,” Hernandez asserted. He then listed the negative impacts the strike could have on students. AP test dates remain the same, requiring teachers to rush or skip over lessons. Students worry that they will not have enough school days to graduate.

Effects more local to Kennedy include the school’s various teams being unable to practice during the strike. Though most sports have completed their seasons, some have not. Among these is marching band and color guard, which will lose rehearsal days due to the strike, according to Hernandez.

“There are 43,024 students attending your schools. That is a statistic, but you must remember that each one is a person with struggles and hopes. Their education, my education is what I use to overcome obstacles and achieve goals.”

He concluded, “So on behalf of 43,024 people, I implore you and the teachers to resolve this issue with a civil, open, and altruistic attitude.”

Rodriguez also addressed both parties in her conclusion, “To the leadership of both sides, are you truly making decisions in the best interest of students and the families with the lens of everyone? Or are the adults in this picture more important?”

Kennedy teachers hope that they can continue to serve their students.

“We would like negotiations to be complete and resolved. We don’t want to leave our classrooms,” Baniecki affirmed.

While not able to say much, Principal David Van Natten will provide a statement Monday. Stay tuned to jfkclarion.com and our social media for updates. 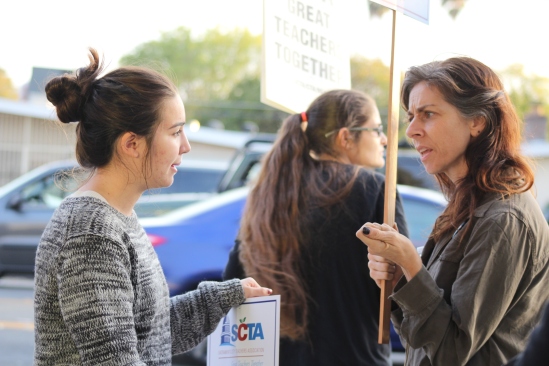 “You know that sign says no photos allowed too, right?” a security guard jests. “I have photographic evidence that says otherwise,” the Clarion photographer responded.

A crowd gathers around to cheer and boo as a speaker shouts atop a utility box. (Photo by Chris Wong)

With the sound of horns honking from supporters driving by and cars silent as their loud drivers rally at the sidewalk, a man removes the flags from the pole outside the Serna Center for the day. (Photo by Chris Wong) 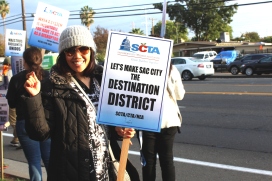 After noticing a Clarion photographer, JFK office technician Estela Brown displays her sign to show her commitment to making SCUSD an appealing district for teachers. (Photo by Chris Wong)

JFK English teacher Joe Spatafore wields a sign provided by the SCTA. Current superintendent Jorge Aguilar made that statement in a recent article published in the Fresno Bee. (Photo by Chris Wong)