Book Review: The Uglies Tells Us Much About Ourselves 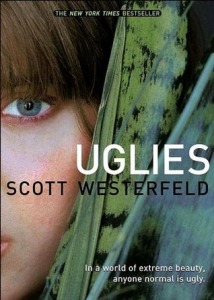 The Uglies series includes three books which document the life of Tally and her peers: Uglies, Pretties and Specials. Until the age of sixteen, everyone is an Ugly, waiting for the day when they can be transformed into a Pretty, and look however they want. There is also a group of people who want to keep their own faces and think changing people into Pretties on their sixteenth birthday is wrong. In this series, Tally experiences friendship, love, betrayal and having to choose between, right and wrong.

Although this series is set in a fictional, futuristic society, it seems to be a commentary on our current social values. The writer appears to be trying to make a point about the way we view beauty today and almost warn us about what will happen if we don’t change. It makes me wonder if – as we already have botox and plastic surgery – we’ll be living in a similar world a few centuries from now. With the value put on beauty already and people already striving to look ‘perfect’, I wouldn’t be surprised if it did happen. I think these books show that we need to get our priorities straight and address these issues.

At the moment, women at least, put beauty before jobs, school, and even their own happiness. This, of course, is wrong. I mean, where will botox, plastic surgery and make-up really get us in life? It doesn’t make us rich or happy and it doesn’t give us love, at least not realistic love.  Most of the people who change their appearance likely only do so because they believe society will look down on them if they don’t. This comes into play in The Uglies series where everyone is forced to completely change how they look and expected to act, whether they want to or not, to please their leaders and peers. Through this book, we can learn how society can place importance on appearance and influence the way people are motivated to make such physical changes. In our world we do not want to end up like the Uglies.

Some examples of how this may be addressed in our society include how new Barbies are coming out that are curvy, tall and short, with diverse hairstyles, a better representation of people in the world around us. Despite the diversity, the dolls will still have perfect features and be extremely beautiful, therefore making it seem as though there’s something wrong with looking anything less than perfect. Although these new Barbies help address the problem of young girls getting concerned with their physical appearance, it doesn’t help the case of too many people smothering their faces with make-up or even reassembling their faces with Botox and plastic surgery. In my opinion, changing Barbies is only the very beginning of what we need to do to protect our world from becoming like it is in Uglies.