SCUSD Board Member Mai Vang, who represents Trustee Area 5, visited Mr. Williams’ 5th period AP Government class on Friday, December 8. She shared her background before being elected to public office and also how students can make change on campus by contacting their district board members.

Vang was raised in South Sacramento by her two parents, refugees from the Vietnam War. Her father attended C.K. McClatchy High School, while her mother attended Luther Burbank. Both eventually earned their GEDs.

Vang is the oldest of 16 children, six sisters and nine brothers.

Growing up, she had little concept of the tough financial situation her family is in until a traumatic experience in third grade. She recalled an experience where the class was watching a movie and students brought snacks. Someone in the class offered to go to the store and buy Hot Cheetos if everyone contributed one dollar.

Vang resolved to sneakily take a dollar from her mother’s purse. She was not yet aware of the existence of food stamps.

“I took out my one dollar food stamp. The girl looked at me and just started laughing, ‘You’re hella poor! You’re on food stamps!” Vang recalled as she described her background.

After being persuaded to attend college by one of her teachers at Sacramento High School, she enrolled at the University of San Francisco. She admitted that her high school had not prepared her for college classes, but avoided dropping out by enrolling in the FORWARD program, a program for immigrant students.

After working hard to get bachelor’s degrees in biology and sociology, she attended UCLA and got master’s degrees in public health and Asian American studies.

However, upon returning to Sacramento, she felt a need to step up and create change in her community.

“I worked so hard; I got all these degrees; my parents wanted me to have the American dream, but I felt so empty.”

This inspired her to create a group to register Hmongs to vote, Hmong Innovating Politics (HIP). She worked with HIP through the school closures that affected South Sacramento five years ago.

“It was the night when Sacramento City Unified School District voted 4-3 to closed down our neighborhood schools in South Sacramento. It was a little past midnight–organizers, parents and students were exhausted and I remember hearing the final vote count. In that moment, I felt defeated. ‘Defeat’ f****** hurts! It hurts because I knew how committed and passionate each organizer worked with parents and students to keep our neighborhood schools open. It hurt because this vote wasn’t just about dollars and cents–it was about children and their future,” Vang wrote on her about page on the HIP website.

“I don’t know why we even have the Hmong immersion program. These people should be speaking English,” the former principal said, according to Vang.

“People who don’t have our lived experiences, they’re going to make decisions for us.”

This train of thought, along with the suggestion from her friends, prompted her to run for the school board. She shared the difficulty of raising funds.

“My mom and I had this folding table we got from Target,” she started. She jokingly pronounced “Target” as “tarjay.” After obtaining the table, she sat outside a market with her mother, receiving small donations from multiple people. She recalled receiving $1.37 from an elderly woman, which though small in amount, made her feel great on the inside. The largest donation she received was $1,000 from Carr, according to Vang.

In addition to performing her duties as a school board member, she teaches ethnic studies at Sac State in the fall. She also works for City Councilmember Larry Carr, one of her teachers from Sacramento High School. Carr represents District 8, covering much of South Sacramento. Vang was the only candidate endorsed by the Sacramento City Teachers Association in the previous 2016 school board election, according to The Sacramento Bee.

According to Vang, Aguilar enrolled all four of his kids in SCUSD schools. He is also only 44 years old, indicating that he will remain in the district for time to come, as opposed to the past several superintendents, who left after matters of only three years.

Vang also took the time to address some concerns students have regarding school policy.

She was recently appointed to the district’s discipline policy committee. She advocates for more restorative policies and hopes to examine why suspension policies are different at different high schools. The possibility of race being a factor crossed her mind while she addressed the class.

Students can also take action by attending Local Control and Accountability Plan (LCAP) Funding meetings. Before students had no voice in LCAP, but now students can go to meetings and voice input on how district funding is spent.

For students looking to take civic action in the district, she suggested talking to school board members. Getting buy in from a board member can lead to getting the political pressure necessary to sway a vote.

“Politics is all relationship hustling,” she said.

She makes visits to schools in her district every Friday.

Vang can be reached at her email, mai-vang-board@scusd.edu. 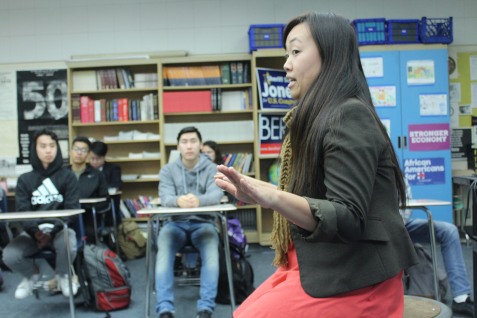 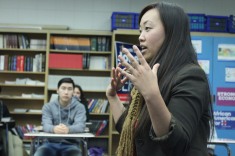 Energy flowing into her hands, Mai Vang emotionally explains her history before becoming a district board member exactly one year before visiting Kennedy on December, 8, 2017. Mr. Williams called in several government officials to help connect students to politicians for their Civic Action Projects. (Photo by Bruce Tran) 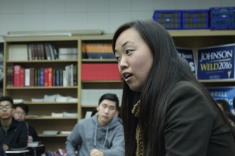 One thought on “SCUSD Board Member Mai Vang Comes to Kennedy”