After school on January 18, students from all grades at Kennedy crammed in the school cafeteria (not in the sense they crammed’ together like sardines but real-time cramming for finals.)    Link Crew sponsored the event and helped students prepare for their first semester tests by plying them with hot cocoa.   All photos by Saeri Plagmann, Clarion Features Editor except where noted. 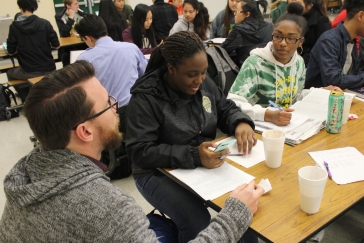 Seniors Makenzie Cross and Isis Venner take in information from their AP Government student teacher, Gregory Prouse. They prepare for the DBQ final the next day and the multiple choice questions the following week. Photo by Thai Saechao

Going over their science material, freshmen Alexa Villalpando and Kayla Stinson help each other to prepare for their upcoming finals. 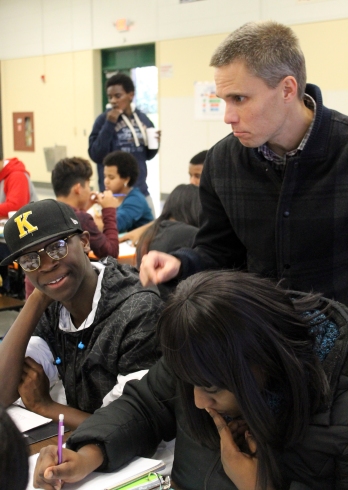 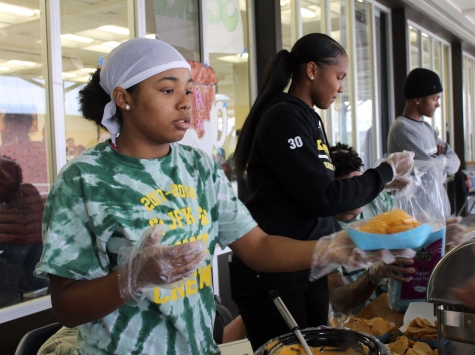 While selling nachos and hot dogs at Cocoa and Cram, senior and Link Crew Leader Malissia Bordeaux serves the food. 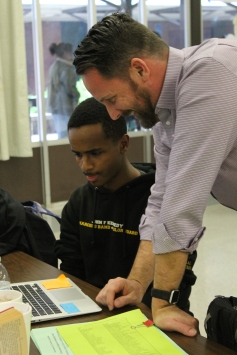 Studying for multiple subjects, freshman Isaac Petros gets help from Kristopher McCarthy for an english assignment.

Freshmen Joseph Billings, Evan Angel, and Dexter McDaniel warm up to their cocoa while studying for math. 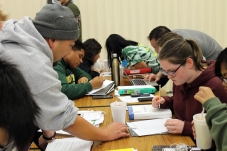 With her math final coming up, freshman Alyson Eystad receives help from James Lam who shows her a step-by-step process of solving a problem.

Enjoying her cocoa, freshman Emma Williams discusses the meaning of a book with her english teacher, Mary-Jo Banieki.

Seniors get together to prepare for the most fretted final, AP Government. They go over multiple choice questions that they will face on finals week

After finishing her cocoa, senior and Link Crew leader Sarah Cerda goes over her english notes while listening to music.

Link Crew comes together for a team huddle in preparation for the first Cocoa and Cram at Kennedy.