YAM is the annual month-long celebration created by the Council for Art Education to help inspire students to develop the skills they learn in visual arts programs. Started in 1961 through The Art & Creative Materials Institute, Inc., their goal is to recognize the importance of art programs in schools across the country, provide new opportunities for people of all ages, and increase understanding in the communities around them.

Kennedy kicked off this year’s Youth Art Month on March 1st with the Spring Concert, which featured the choir, winter drumline, jazz band, and concert band.

“The choir performance at the WEAVE [Spring] concert…had a theme of not being heard and underrepresented,” described Mr. Stroh, piano lab teacher, choir director, and co-band director. “A lot of heads were turned and I was extremely proud of the choir for what they did that night.” The concert was in partnership with WEAVE, an organization against sexual assault, domestic violence, and sex trafficking and fundraised to donate to the cause. Over the course of the following week, students from art classes were allowed to create a small drawing that would be incorporated into a large display on the windows of the auditorium, where they can be seen by the whole school.

On March 6th, Richard Hallmarq, Kennedy alumni and former contestant on the popular reality show Project Runway, returned to showcase his work and inspire students as he shared personal experiences from high school and his career. He explained he had found his passion for sewing at Kennedy and how he worked extremely hard to graduate high school and get where he is now. Hallmarq urged students to pursue whatever skill they are passionate about no matter what and see where it will take them.

All these events led up to the huge collaborative effort of the JFK Visual and Performing Arts department, where the Kennedy art teachers came together to host the Second Annual Youth Art Month Assembly, where the projects of Kennedy students were displayed in a slideshow on screen and all around the auditorium. Many crafted pieces from Mrs. Graves 3D art classes sat in the display cases against the walls, showing the many clay and large paper creations. Self portraits, pointillism, abstract distortion pieces, and many other projects done throughout the year were chosen to be displayed from both Mr. Teweles’ and Mrs. Hanzlik’s beginning and advanced art classes. “I always had an interest in drawing… when I went to high school I had the most inspiring art teacher as a freshman,” Teweles explained. “…with anything in life, practice has made me better, but the most important thing when creating is confidence. To me, every mistake in art can be fixed so what is stopping me from applying the tool to the canvas. That is confidence.”

The show started off with drumline playing as the room began to fill, to get the audience excited. The emcees, Allen Turner (11) and Sid Slesicki (11) introduced the event and welcomed acts onto the stage. The choir, directed by music instructor Mr. Stroh, sang the song Can You Hear by Jim Papoulis, and dedicated the performance to the victims of gun violence in Parkland, Florida. Following the choir, drama performed two classic Monty Python skits, Dead Parrot and I’m a Lumberjack, along with a rap battle pitting Edgar Allen Poe against Stephen King, proving to be a crowd favorite. “I like to get to the audience’s emotion, if I can make them experience fear, laughter, crying, then I feel I have succeeded,” drama teacher Mr. Lee said in an interview afterwards.

As Youth Art Month winds down and March ends, the spirit of art at Kennedy definitely will not. Our campus is always bustling with life and new events and artistic talents everywhere you look. “If it scares you or makes you uncomfortable, then you’re doing the right thing. If it’s working for you and it’s easy, then you’re not doing the right thing. That’s the easy way out,” Mr. Stroh concluded. 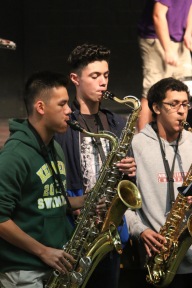 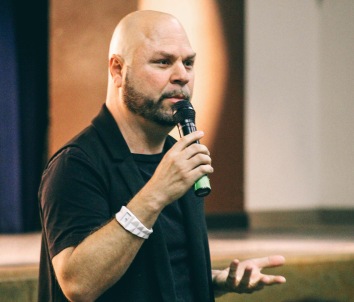 Former JFK graduate and guest speaker Richard Halmarq shares his personal story while barely making it out of high school, he was able to follow his dream and become a fashion designer. Photo By Sage Bermudez