Way Back Machine – 35 Years Ago 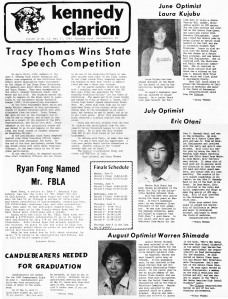 The Epsilon XI Chapter of the Omega Psi Phi Fraternity sponsored their sixth annual awards banquet to recognize and award graduating black seniors who have made significant accomplishments throughout their high school career. Students from all 21 high schools in the greater Sacramento area have been considered for this award, of which 15 Kennedy students have qualified and received achievement plaques. Those who have been exceptionally outstanding received scholarships.

Kennedy’s former Activities Director, Byron Clemons, led a group of Kennedy students on an educational vacation in 1983 to Europe. The trip began in Amsterdam, then Copenhagen, where the group traveled south by a steamer to Warnemunde and Rostock in Germany, crossing Mecklenburg Lake District on their way to Berlin. Through the Ore Mountains, they crossed the border into Czechoslovakia and reached the capital, Prague.

Continuing south the group drove through Bohemia and Austria, passing Traunsee, the largest lake in Austria, and the Venetian Alps. After arriving in Venice the group prepared for Rome where they traveled north through the cities of Assisi, Perugia, and Siena, reaching Florence, then Nice. Going back into Italy Clemons led his students to Switzerland where they made their final stop up north in England.

The Program for Arrested Teens

If a teenager were to be arrested, the Juvenile Offender Program gave tips on the steps they should take to “lessen the severity of treatment by the criminal justice system.” It advised that after being arrested the teen will be allowed to give a call to their parents, which, if possible, should be handed over to the police officer for them to explain the situation, as the teen may not be able to give accurate information in the heat of the moment.

If the offense committed was a misdemeanor, such as vandalism or disturbing peace, parents would most likely be able to arrange bail by signing a surety bond if they own property. If they do not, or you cannot raise the necessary amount of cash, parents should turn to a professional bail bondsman for a last resort. They usually charge a nonrefundable 10 percent fee. On the other hand, if the offense was a felony, such as a car theft or burglary, it is absolutely necessary to contact a lawyer for legal advice.

Letter to the Editor

The Kennedy Clarion Editor of 1983, Alan McKinney, received a complaint from an anonymous student on a piece from a previous paper about Kennedy building a stadium. Anonymous stated that Kennedy was “wasting time and money” by building a $200,000 football stadium that it did not need, and which would not be completed when the next school year began. McKinney replied by saying that Anonymous should make sure they are not ignorant about what they have to say and that they should have read the story more carefully. “Kennedy is not the one who is forking out $200,000 for the stadium,” he said, but in fact would come from the Kennedy marching band supporters, parents, and alumni, who graciously donated to the school. McKinney went on to say that the story had clearly stated, “with completed schedule for the fall of 1984.”

Candle Bearers for the Class of ‘83

An advertisement was looking to recruit 24 girls who would hold candles in a “processional line” for the 1983 Commencement Night for graduates. Although the deadline had passed, any girl would be accepted, so long as they were not seniors.