The 2018-2019 Boys Varsity and JV teams were filled with young prospects and athletic talent. It was a fresh start for the program which has been led by new head coach, Kenyon Hill.

“Our junior class is strong and that bodes well for next year’s team, we have some solid players emerging from the JV team,” stated by Coach Hill.  “I feel the program is on the right track in terms of growth and we hope to be the soccer hub for the Greenhaven community.” Coach Hill’s philosophy in leading the varsity team is to improve his team’s experience by having them play hard while having fun on the field. 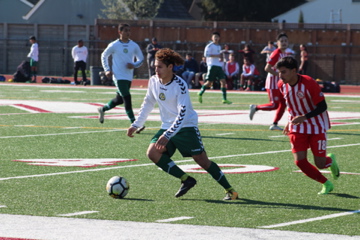 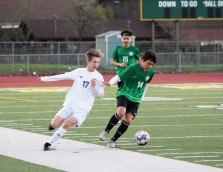 The boy’s varsity soccer team scored huge wins against Burbank and Monterey Trail. They blew out their opponents, beating Burbank 4-0 and Trail 7-1, using their skilled footwork, fast ball movement, and quick agility. Those big wins pointed toward the true potential of the boy’s soccer team giving them hopeful momentum for the second half of the season. They were hungry for redemption, determined to come back stronger than ever, while also trying to claim a playoff spot. The soccer program hasn’t made the playoffs since 2012, coming close every year as the fourth or fifth runner-up.

In the end, the varsity team fell short of making the playoffs ending with a win-loss record, short of expectation and below .500. They put in a tough effort giving it their all in each game, and while only winning three metro league matches, they still ended up winning something greater. The players became close and quickly learned, along with their teammates, that working together on the field was more important. Their chemistry was shown in games, as selfless gameplay and laughter between teammates were highlights in each match.

Kennedy Soccer star Aksel Rodarte c/o 2019 states,” We’re all close on and off the field, we know each other’s strength and weaknesses so we all work for each other. We just have a strong connection with one another.” A team so close and connected is truly the meaning and success of the boy’s varsity 2018-2019 soccer season.