In recent years, Kennedy has adopted a variety of programs that aim towards making our campus a place of positivity. From Club Smile to Link Crew, Kennedy has made many improvements towards enhancing the high school experience. Now, one more group is continuing that effort but in a different fashion.

Students may have seen the big banners across campus, with bold letters stating “Get Invested” or “Be Thoughtful.” This is a recent campaign initiated by Kennedy’s EQ Ambassadors — “Emotional Quotient (EQ) Ambassadors”– the name is derived from ‘Intelligence Quotient’ (IQ) – a group comprised of 12 students who work collectively to improve school culture and climate. Three fundamental responsibilities –Cougar Canon campaigns, Walk-and-Talks, and case management– have been assigned to the EQ Ambassadors and should be fulfilled over the course of the school year. They first oversee school wide campaigns and are assigned one per quarter – this is tied to the Cougar Canon, a list of accomplishments and outcomes that Kennedy faculty works to instill in students by graduation. 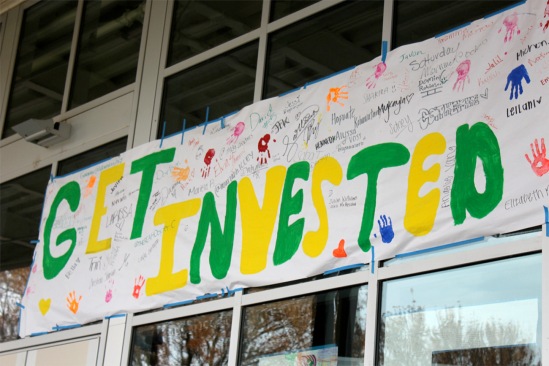 “Walk and Talks”, case management, and conflict resolution sessions are also an inherent part of the EQ Ambassador work.

EQ Ambassadors carefully designate a specific Cougar Canon message to each quarter. “Get Invested” was assigned to first quarter, with the idea that “Getting Invested” at the beginning of the school year will set students up for success within the following months. With a similar mindset, “Be Thoughtful” was chosen for quarter two, and “Seek Understanding” along with “Have A Purpose” for quarters three and four.

The planning process for getting the Cougar Canon message out can be challenging to EQ members. Two Ambassadors are assigned per class period and all 12 of them meet every other Monday. Even though this limits their opportunities to meet more frequently, their work has proven to be effective. During meetings, they discuss what each Cougar Canon campaign will look like, asking themselves: “What will engage students? What will engage staff? How will we spread the message?”

For their first campaign the EQ Ambassadors did a variety of things to broadcast the idea of “Getting Invested,” including messages in the announcements, setting up posters around the school, and staging a scavenger hunt. The scavenger hunt consisted of students going around campus, discovering the different characteristics about Kennedy’s clubs. When completed, each student received a free personal-sized pizza and signed a poster, describing how they will personally get invested. The “Be Thoughtful” campaign had a different approach, where the EQ Ambassadors’ work expanded beyond Kennedy. Over a thousand candy canes, with attached positive messages written by the EQ Ambassadors, were bought and given to select neighboring elementary schools.

“Seeing the work that they do fills me with joy,” Kennedy Assistant Principal Buitrago, EQ Ambassador Advisor, told The Clarion. “There are times when I see them in action, and I see them doing their conflict-resolution work, and the only way I can really describe it is just pure love. It makes me remember why I got into education and it makes me think ‘Wow, that is the type of work I want my own children to engage in.’”

“Walk-and-Talks” are another EQ Ambassador responsibility that, so far, have shown improvement in terms of student behavior. When a student becomes disruptive or distracted during instruction time, a teacher has the option to call an EQ Ambassador, who will spend approximately 5 to 10 minutes talking to the student regarding the issue that arose. This is a more effective way to minimize behavioral problems as well as an alternative to a referral. Typically, when a student receives a referral, a good chunk of class time is missed; this absence can possibly impact their grade. None of this is about assigning consequences – a “Walk-and-Talk” is designed so that a student can identify what they did wrong, learn from their mistakes, and realize what needs to be improved upon in the future.

“I can’t say how much its helped yet but there has been a great deal of improvement. There were students who used to come in regularly who stopped coming in because they don’t get in trouble anymore. There are tools that we give them in their daily lives to get along with and to understand people. I definitely feel like it’s helping the kids mentally and helping them understand that no one is against them,” EQ Ambassador Hunter Jess, c/o 2019, explains.

Case management and conflict resolution sessions are a practice that the Ambassadors received training on in the beginning of the year. Case management occurs when a staff member notices that a student is engaging in activities not desirable in a high school environment. The EQ Ambassadors are assigned to mentor these students regularly throughout the course of the school year. Conflict resolution, however, typically involves two students who have an issue. The two students alongside the EQ Ambassador, who will serve as a moderator, will openly talk about the problem.

Despite being their first year, the EQ Ambassador work is something both Kennedy staff and students can look forward to seeing grow. Even though Ms. Buitrago, alongside the Ambassadors, cannot officially say they have made an impact on campus, its evident that their work has brought renewed positivity to Kennedy.