Her Own Did Not Receive Her: Actress Yalitza Aparicio Slighted After Roma

In the Netflix film “Roma” lead actress Yalitza Aparicio plays Cleo, a domestic maid who works for Sofia and Antonio to take care of their four children in 1970s Mexico City. The movie tells a story about the relationship between the maid and the family as they face life-changing events.

Yalitza Aparicio shown in a scene from “Roma” as the maid working for a family in Mexico City in the 1970’s.

The movie unexpectedly gained international acclaim and was nominated for 10 Academy Awards, winning Best Director, Best Foreign Language Film, and Best Cinematography. Yalitza Aparicio also gained immense popularity as a figure of social justice, making her stand out from the rest of the Oscar nominees. Aparicio is the first indigenous actress to be nominated for Best Actress at the Oscars.

Many stars of Latin American television applauded Aparicio’s performance, heralding it as the beginning of the end of racism and classism in Mexico; however, others found Aparicio and her ensuing fame distasteful.

Soap opera actor Sergio Goyri, in a recorded dinner conversation, said he didn’t know why “they would nominate a [explicit] Indian who only says ‘Yes ma’am’ and ‘No ma’am’ ”. Yuri, a singer, also said that she found Aparicio’s performance inspirational, stating: “Most people think that to be in movies you have to be beautiful, you have to have this gorgeous body. And she is nothing like that. She proves that anyone can do it”. After much public outrage, as well as explosive social media reactions, both stars rescinded their comments, stating that their statements had been misunderstood by the public.

The negative reactions did not end there. A group of Mexican actresses reportedly banded together, attempting to disqualify Aparicio from winning an award from the Mexican Academy of Film. All three actresses involved have denied this.

It is not only the rich and famous who have disparaged the young actress. Many hateful comments have come from social media. Some posts have garnished national (Mexican) attention with comments such as: “She looks ridiculous in that brand name clothes”; “Nevertheless, she looks like a flea market vendor”; and “When the maid tries on the Mrs’s clothes”. Even notable Hispanic media companies have portrayed Aparicio in an offensive manner. Hola!, a popular magazine, featured Aparicio on their front cover. Much to the public’s dismay, however, her image had been photoshopped to make her look increasingly lighter skinned and thinner. In an awkward attempt to explain the situation, commenters suggested that it was the light of the sun that muted Aparicio’s skin tone. 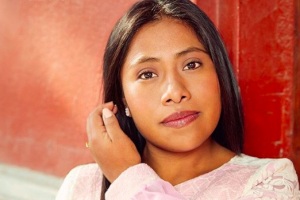 But perhaps the most outrageous example of racism was the parody endorsed by Televisa, one of the biggest television stations in the Spanish-speaking world. Small-time actress Yeka Rosales wore a fake nose, brown paint, and made exaggerated faces that are commonly attributed to indigenous Mexicans. The parody, now dubbed as “brownface” has been deleted from Rosales’ social media account. Additionally, the director of Televisa has issued an apology calling the parody “in bad taste.”

It is striking how even after almost 80 years, people are still outraged and disgusted by minority women winning major awards in film. In 1940, Hattie McDaniel, who played the role of “Mammy” in the classic film Gone With the Wind, won Best Supporting Actress. At the time, black Americans were not allowed into the hotel where the Oscars took place; McDaniel and her escort were admitted as a favor to the film’s producer, who pushed for the hotel to allow her. The pair was forced to sit at a segregated table in the back of the hotel restaurant and were accompanied by McDaniel’s white agent, William Meiklejohn.

According to The Guardian, William Nericcio, a professor of the Center for Latin American Studies at San Diego State University, said that given the Mexican media’s historic treatment towards the  indigenous population, he is not surprised by the actions of Rosales. “The Mexican elite disposition has always portrayed indigenous people as funny and ugly,” says Nericcio. Nericcio said that indigenous people are speaking out, also through social media. Despite these negative reactions of people of Latin America, many Mexican-American supporters from the U.S stood up and defended the young actress. These supporters noted that they see themselves in Aparicio and feel proud of themselves of their indigenous origins.  Lilia Soto, an American Studies professor of the University of Wyoming, expressed that “Aparicio’s presence is showing that we matter…. The racism she’s facing from Mexico also is an attack against us.”

In response to all of these attacks, Aparicio commented “I am proud to be a Oaxacan indigenous woman, and it saddens me that there are people who do not know the correct meaning of words.” Amidst all of this backlash, Aparicio’s supporters (who affectionately call her ‘Yali’) eagerly await what the young Oaxaceña will accomplish next.