John F. Kennedy High School will hold its Inaugural Athletics Hall of Fame on May 18, 2019 in the school auditorium.   Kennedy H.S. will look back in history as they celebrate, acknowledge, and recognize alumni through their extraordinary achievements. Eleven candidates will be honored at Kennedy by participating and excelling in the high school’s athletic over the last five decades. Several individuals who coached and held various roles in Kennedy Athletics will also be recognized and acknowledged in four categories: Athlete, Contributor, Coach, and Team. 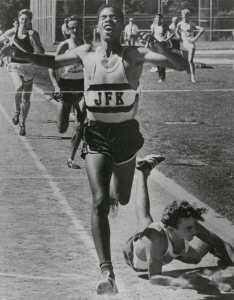 In 1968, West, a senior and new student at a new school (John F. Kennedy High School’s first year was 1967-1968) was getting ready for the state prep track and field meet. West arrived at the meet with only the 13th fastest qualifying time which didn’t seem to worry him as much as Tom Davidson, who hadn’t lost a race in two years. Not only did West run faster than ever before, with his hands in the air, the crowd roaring, West crossed the finish line beating Davidson by only half a second and became the State Champion.   West later made the 1972 U.S. Olympic Trials in the mile but failed to qualify.  In 2016, West was honored by being inducted into the Sacramento Running Hall of Fame.

Clarence “Butch” Metzger has had a very successful career in baseball playing on four different teams (San Francisco Giants, San Diego Padres, St. Louis Cardinals, New York Mets)  and in five seasons achieved a 18-9 record with a 3.74 ERA, 23 saves, pitched 293.1 innings, gave up 289 hits, walked 140 and struck out 175 men. Only 4 years after he graduated from Kennedy he made his major league baseball debut with the San Francisco Giants. In 1975, Metzger was traded to the San Diego Padres. Metzger had a hard time controlling his pitches which led him to improving, not only did he successfully maintain control but became MLB-Rookie of the Year as part of the SD Padres. He posted a 2.92 ERA, along with an 11-4 record, 89 strikeouts, 52 walks and 16 saves in 123.3 innings of work. In 1977, Metzger traded again with the St. Louis Cardinals for pitcher John D’ Acquisto and infielder Pat Scanlon. Another year had past when Metzger had been placed on a waiver by the Cardinals and eventually picked up with the NY Mets on April 8th, 1978.

Greg Vaughn had tremendous success in his baseball career over the years, playing on five different baseball teams. He played for the Milwaukee Brewers in 1989–96, the San Diego Padres in 1996–98, the Cincinnati Reds in 1999,  the Tampa Bay Devil Rays in 2000–02 and the Colorado Rockies in 2003. Vaughn’s power hitting skills were impressive throughout his career with a total of 355 home runs and 1,072 RBIs.   His career included 1,475 hits, 284 doubles, 23 triples and 121 stolen bases in 1,731 games. In 1999, Vaughn had become the first player in the major leagues to be traded after a 50-homer season, when the Padres traded him to the Cincinnati Reds.

Keith Frostad wasn’t your average swimmer. In fact by the look of him most people wouldn’t believe he was a swimmer, let alone someone who participated in the Olympics. As Keith went through high school he began to realize he was overweight, but that didn’t discourage him in the swimming department considering he’s been swimming since he was six years old. Keith competed in the Barcelona Olympics in 1992 and came in 7th place in the 1500 free. Not only was he an All-American throughout high school, but he achieved the 11th fastest time in the United States and became the six time US Champion between 1992-1996 in the 1500, 800, and 400 free. He also won three championships in the 1500-meter freestyle, one in the 800-meter freestyle, and one in the 400-meter freestyle.

Ernest Lee had major success in his career, he’s definitely one of Kennedy’s proudest alumni member. Not only did he become Sacramento Bee’s player of the year as a senior, but a Cal-Hi Sports First Team All-State choice after leading Kennedy to a 28-1 record, with an average of 34.1, 29.3, and 29.7 points per game. He also made it second in the Top 100 boys’ players ever in the late ’90s boosting off his career.  In 1994,  due to a mixture of depression and drugs Lee took his own life.  His career had been a tremendous success  but with a tragic ending.

Michael aka Yogi Stewart was a standout player for Kennedy’s in the early 90’s.  Standing at 6’ 11” Stewart was a defensive powerhouse and broke all shot-blocking records for the school before heading to UC Berkeley he did much of the same.  He set a school record by blocking 59 shots as a freshman in 1993–94 holding the four best single-season totals for blocks in UC Berkeley history. In 1997, Stewart signed with the Sacramento Kings and ranked second overall among NBA rookies. In 1999, Stewart was signed as a free agent for the Toronto Raptors, a six-year $24 million dollar contract. In 2002 he was traded to the Cleveland Cavaliers in exchange for Lamond Murray.

Jody Hashigami was one of the most memorable players when it comes to basketball, leading the Cougars to a 20-1 regular season record and the Delta League as well in 1991. Hashigami averaged an outstanding 28.7 points per game and a record of 41 points. Unfortunately, Hashigami’s journey ended when she hyperextended her knee in the section playoffs.

Hashigami was later able to return to Kennedy as a coach, and worked alongside her father coaching the celebrating basketball team that won the 2002 CIF NorCal Championships.

These two individuals have contributed to the Kennedy community for many decades supporting academics and athletics.  They have helped athletes during sporting events and provided moral support and left a lasting influence on Kennedy students and staff.

The Inaugural Athletics Hall of Fame will be held in the Kennedy Auditorium on May 18th, 2019 @5:30pm.  Information and tickets at John F. Kennedy High School site.