It has been quite a spring in our school district.  The 1-day teacher strike on April 11 left parents, teachers, and students of Sacramento City Unified School District (SCUSD) asking: “What was going to happen? Will it happen again?  If so, when?” As it turns out, SCUSD and the Sacramento City Teachers Association (SCTA) have not resolved their disputes.  Still, a second strike, planned by SCTA for May 22, was postponed in good faith that both sides will need to work on contract agreements and avoid more labor actions in the coming year.  Meanwhile, SCUSD discovered millions of unaccounted-for dollars in their ledgers, which has helped to ease fears of the state taking over district operations. 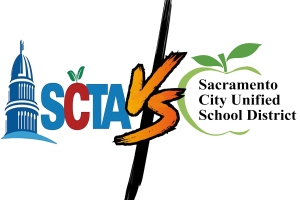 Most Kennedy students were absent during the strike on April 11, the first labor action in decades, but school was technically still in session. A majority of Kennedy’s staff — along with several courageous students and honking drivers — protested on the sidewalks of Florin Blvd. and Gloria Dr.  They demonstrated at Kennedy, and then joined with other SCUSD teachers at 11:00 for a larger scale protest at Serna Center, the site of the district offices.  At Serna Center, union leaders and teachers from Sacramento, as well as Oakland and Los Angeles, took turns making speeches to the crowd.

Back at Kennedy, the few hundred students who appeared at school were herded into the T-wing box classrooms to sit for hours.  The district hired outside people looking to earn an advertised $500. These “substitutes” did nothing but attempt to ensure that the students did not leave the classroom they were placed into. They did not have background checks or have the gumption required to stop students from leaving classrooms. There were some incidents: students trashed Mr. Lam’s classroom, pulled down lights from the ceiling, threw student work everywhere, and left behind wrappers and food.  Substitutes also could not stop students from leaving their designated classrooms, leaving that to campus monitors. Regardless, operations at Kennedy continued throughout the day, ending with a movie in the cafeteria.

Despite teacher demonstrations, the district still refused to meet with SCTA until the May 16 board meeting.  The board informed SCTA that, by cutting 178 jobs and different programs in the district, a whopping $33 million was found, a quantity nearly enough to pay off the $35 million budget deficit that would be needed to keep SCUSD free from state control. Unfortunately influential teachers have still been laid off due to staff cuts. Among others, an elementary school teacher expressed her sadness and frustration towards those who made the decision to lay her off.  Multiple programs from different schools, including bands from Kennedy High, McClatchy High, Sam Brannan Middle, and others, protested the potential cutting of their programs, each explaining why their program is so important to them and future generations. This meeting went 3 hours overtime, ending at 12:30 AM due to the amount of information and conflict between teachers and the district.

The second 1-day strike, planned for May 22, was ultimately postponed by SCTA.  Class learning continued as normal, and hundreds of teachers converged after school upon the state capitol to join in the California Teacher Association’s RedforEd Rally, standing alongside fellow teachers from our region and statewide, to signal unity and, hopefully, a smooth year ahead.