Basketball in the Back

The back of the school, by the gym and T-wing, is where the basketball courts are and they aren’t used during lunch. I have been wondering since the first day of school, why aren’t we allowed in the back? I know I’m not the only one who wants to know why we can’t be back there because I’m not the only one who wants to go in the back to play basketball or even football. The only thing we are able to do at lunch is stand around or walk with friends which can get boring fast.

During lunch in middle school, we were able to go in the back to play basketball, football, or even soccer. I understand that middle school and high school are different but if middle schools allow it why can’t we have it here at Kennedy? The back has a lot of hoops so I feel as everyone will be able to play basketball if they wanted and still have room to play football as well. 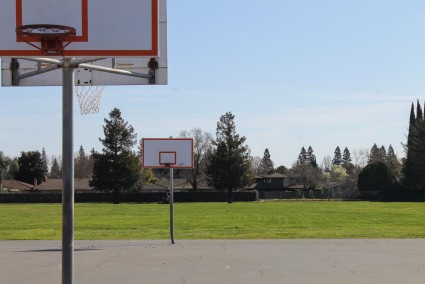 The courts were put in the back for a reason and we don’t really use them enough when they are meant to be used and played on. People who have had a bad day may like to play basketball to get stuff off their minds or like throwing a football around with a friend to get things off their plate. I know a lot of friends that use sports as an escape from the outside world when they are mad or sad. When I feel like getting something off my mind, I usually play sports but I feel like I have to do it only when I get out of school because I am not allowed to go in the back during lunch.

Being able to go in the back can let people practice on a sport inside or out of school. People may want to put shots up before a game and get a warm up in. I like to practice before a game and I would like to practice by myself before I practice with my team. Being able to play in the back may make people try harder in P.E. to see what activity they are going to do after a mile or half-mile. I know a lot of people who want to be able to play in the back because lunch seems boring just standing around or eating lunch.