Overall, Kennedy’s cross country (XC) program is not well known by students; but despite the underrepresentation, both girls teams strived to do their best. The frosh/soph girls dealt with a shortage of runners throughout the season (only 5 frosh/soph girls in total), impeding them from competition for a team title. The varsity girls, however, did very well this season, having 6 runners place in the top 20 at the Metro League Championships. Still, McClatchy’s prevailing varsity girls clean sweeped for 1st place and ended up making it to state as a team. Olivia Mihos (c/o 2020), one of the top runners on Kennedy’s team, thought they “…did a really good job supporting one another this year and knowing how to challenge ourselves when it counted. Next year’s team is in a great position [to succeed], too.” 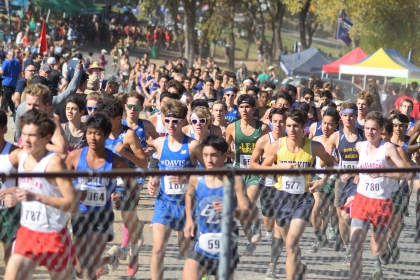 Andrew Hunsaker (c/o 2020) moving up in the pack at the San-Joaquin Sub Section Meet in Angels Camp, California on November 9th. Photo by Terrence Gladney.

The boys XC team came into this season dealing with bigger problems than beating their rivals. After running fantastic times in both frosh/soph and varsity at their first few races, injuries plagued runners on both teams. Although McClatchy’s varsity boys ended up overwhelming the league in each grade division, our boys fought hard with what they had. With the frosh/soph boys finishing 3rd in the Metro and varsity boys finishing last, there is definitely room for improvement. Captain Mugita Kurosaki (c/o 2020) believes that the team always supported each other and that they did their best to finish the season well. Only time will tell if the rising talent from both teams will get Kennedy out of this ditch. 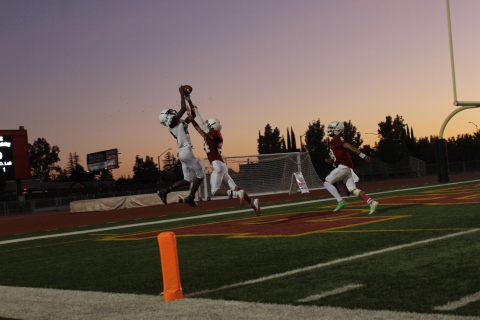 Each high school prides itself on its football team, but this year’s season was hard for Kennedy students to feel proud. The JV team produced a fantastic season of 9-1, losing only to the dominating Monterey Trails team, who’s varsity team went on to beat the reigning state title holders Folsom High School in the section playoffs. Our varsity team, however, had a losing season of 3-7, finishing 4th in the league. Manman Garner (class of 2020), running back for the varsity team, stated. “Our team’s biggest feat this season was beating Burbank for the first time since 2005. It felt good to [be the team that finally] broke the losing record.” With the JV team moving up, expect a stronger season from our varsity boys next year.

The golf team struggled to recruit enough players to form a team, but once enough students joined, they managed to create a tight-knit and enjoyable environment. They played a couple of matches every week and even won some of them. Nikki Tanaka (c/o 2020) stated to the Clarion, “It was a fun golf season this year. I enjoyed playing with my teammate Makena, and she will carry on the torch for the next few years.” Golf is an enjoyable sport, and with manyopenings on the team, students should consider joining.

With the majority of the team consisting of underclassmen, the girls water polo team finished a fun and memorable season with a 2-6 score in the Metro League. Emma Neary (c/o 2020) when asked about her most memorable experience with this team was, “…senior night because all of my close friends and family were there and they were cheering loud[ly] for me…” Like many other fall sports teams on campus, this team is set for success, too, as the underclassmen will take over next year.

Like the girls team, boys water polo also consisted of an underclassmen majority team. Finishing off with a 5-4 run in the Metro, they proved that they could become a threat next year. Ben Van Eskerige (c/o 2020) told the Clarion that going to a tournament and winning every game they played with no bench players was the most memorable moment for the team. He concluded with a quote that should bring many of our hopes up: “Next year’s team will be very good.”

The girls tennis team made many improvements this year and the results definitely proved their worth. The varsity girls finished with an overall score of 8-5, with a 6-4 score in Metro League games. 12 girls also went to the Division 2 Playoffs after placing in the Metro  League Championships. Coming off a 4-9 overall season last year, this season could be their first step toward winning against our dominating rivals, McClatchy. Lillie Andrew (c/o 2020) said that playing with her fellow teammates, no matter the outcomes of their matches, was fun and enjoyable. She looks forward to seeing what the future of this team holds for Kennedy and for the Metro League. 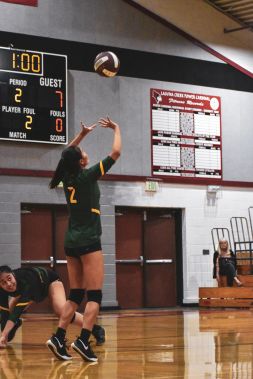 After Sisi Vainuku (c/o 2020) made a nice save, Maia Campos (c/o 2020) sets the ball to her teammates against Laguna Creek on October 16th. Photo by Maia Campos.

The girls volleyball teams finished a fantastic season, not to mention the varsity girls obtaining Kennedy’s fifth Metro Championship and entering the playoffs for the third time in a row. The freshman and JV teams had an overall score of 8-10 and 11-10 respectively, showing huge potential for the future of our volleyball program. The varsity team had a dominating season in the metro league, finishing with a 10-2 run. Anaise Smith (c/o 2020), captain, said to the Clarion, “The whole volleyball program put in the work this season and it was truly a season full of success and growth… I am fully satisfied with it[.]” Through all of the hard work and determination they put in, we can all agree that they deserved the Metro title.